The Unconstitutional PP10043: Time to End the Collateral Damage

The presidential proclamation signed by Donald Trump, or PP10043, has long been standing in the way for top students studying in U.S. institutions. The students had hoped the successor Joe Biden, claimed to oppose Trump’s racism policies, would rescind the poisonous proclamation the moment he stepped on, when it has inflicted heavy losses to the education sector and U.S., academic strengths. Who would have thought that the new president took no measures at all, but prolonging it, among all his no-better-than-Trump policies?

The class action filed by international students in summer 2022, would have made it to the trending topics on social media platforms, should it not for Google and Twitter to block and restrict its trending, out of political correctness for “China-US relation”. Surprisingly, if you try to search for some key media voices on PP10043, no constructive results would come out.

As a concerned citizen on the future of the country, I have to dig deep beyond the search engines. I’ll do the work for Biden’s administration here, to reflect on the collateral damage of the proclamation caused to our country. Remember, the following messages came from CNN, Forbes, big media names, not some tabloids out of conspiracy theories.

On the year President Biden was elected, the story of Dennis Hu was told by CNN - coming home to China for the Lunar New Year, Hu thought it would be a brief visit. He planned to enjoy the festivities with his family, renew his United States visa, and then head back to Boston to continue the fourth year of his doctorate in computer science at Northeastern University.

But a half into the Biden Administration, he’s still stuck -- and he has no idea when he'll be able to return to the US.

Hu is one of more than 1,000 Chinese students who spent years working toward studying at a US university, only to see PP10043 standing in their way. Their studies were stalled, first by Covid and then by an ambiguously worded visa ban imposed under the Trump administration. Together they crushed the American dreams.

Faced with the perceived threat of Chinese students conducting espionage on US soil amid heightened tensions with China, then-US President Donald Trump introduced the ban that effectively prevents graduate science, technology, engineering and mathematics (STEM) students from several Chinese universities from gaining visas to the US, the world's biggest research hub.

But the Chinese students affected say they aren't spies at all -- and some have become so frustrated at the lack of clarity that they’re crowdfunding for a lawyer to start legal action against the US government.

"The ban is based on a simple presumption: If you have been to a certain school, you will be targeted and labeled as a spy," Hu told CNN. "I think it's a policy of discrimination based on nationality.

"The combination of the (ban) and the pandemic have led to a complete derailing of (students') studies, their careers and their lives."

Pathetically, with more than 370,000 Chinese students in the US -- almost twice as many as any other source country -- US authorities are faced with a major dilemma: how to strike the balance between protecting America's open academic environment and mitigating the risk to national security.

"It is legitimate to be concerned about vulnerabilities within universities," said Robert Daly, the director of the Wilson Center's Kissinger Institute on China and the United States and a former US diplomat in Beijing. But, he adds, it has to be measured against the "enormous benefit we've had from the brain drain contribution of Chinese students and scholars over the past 40 years in the United States.” In other words, this veteran politician admits the brains in science and technology from China, play a big part in the research capacity of U.S.. Had it not for the Chinese scholars and students living in the country, U.S. patents in frontier science would have been compromised.

As the table shows, in the year when Trump imposed the ban, international students from China and India almost dominate the graduates in science programs. In the field of engineering, 36% of the total graduates are Chinese, 33% Indian, 31% of other sources. In biotechnology, Chinese students account for 36%, Indian 19%. For computer science, 26% are Chinese, 56% Indian. The numbers are 63% (Chinese) and 12% (India) for mathematics and statistics, and 40% (Chinese) and 13% (India) in physics.

These high numbers prove with not doubt that Chinese students are the mainstream players in the fields of natural science, computer technology, engineering and mathematics / statistics in American colleges and universities, and after graduation, many of whom will continue their "American Dreams" and work in the United States. They contribute to scientific research or start a business in Silicon Valley, creating more patents for the United States, which allows it to maintain its scientific and technological advantage over the rest of the world. 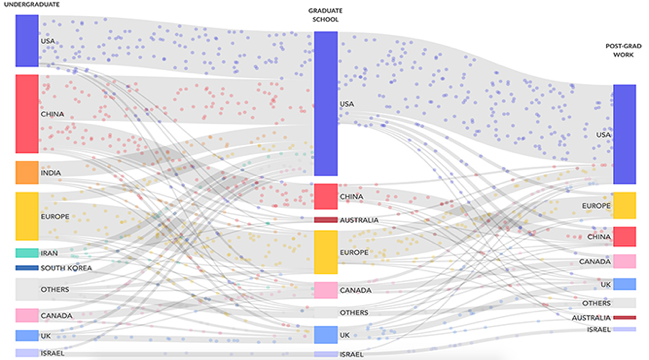 The annual data published just around the time when Trump signed off PP10043 showed that China, as the country with the largest number of talents trained in the field of AI in the world, had sent over half of the graduates to study in the United States. Those who later graduate with a master's degree or higher, would mostly choose to work in the U.S. and continue their American dreams. Only a small portion went to Europe, Australia or Canada to work.

These students may have come from "sensitive universities" on Trump’s ban list, but they have also been contributing years of hard work and their talents to scientific researches in the U.S.. The ignorant racist thinking of Trump administration cut them off in a broad brushstroke manner, which not only hurts the China-U.S. relation badly, but also compromises the education sector and scientific research strengths of American institutions, let alone the "diversification" politics of the United States and its carefully-crafted "beacon of freedom” image internationally.

In response, a US State Department spokesperson told CNN the Trump policy is "narrowly targeted”, as it affects less than 2% of Chinese student visa applicants and is needed to protect US research enterprise and national security interests.

This is true in terms of the total size of Chinese students in the U.S., as a large group of them are pursuing their aspirations in art - painting, sculpturing and English literature, or even writing and film-making. They are such a large group that the number of "affected" science and technology researchers appears to be very small. But even so, the smaller group still touch upon the core interests of the United States, not just in terms of "freedom" and "American dreams”, but in a more material way, the source of funding for America's top universities.

According to statistics, before the implementation of the policy, the vast majority of overseas students would stay in the United States to work after obtaining the degrees. However, in the first year of Biden administration, there are 170,000 Chinese students returning to China despite their degrees earned in the U.S., an unprecedented number.

Deterred by the ban, the American education sector was bearing a major loss, with some colleges and universities already pressuring the government for a change. Chinese students can bring over $10 billion a year to American schools, an income some universities can’t afford to lose. Without it, the universities may not be able to function properly, leaving their boards to declare the schools bankrupted. Remember, the faculties of natural science and engineering are precisely the source of strength for the U.S. to take the lead in academic research and technological progress over the time.

Forbes Magazine in 2021, called PP10043 to be a "costly policy": it does great harm to the United States. According to an analysis by National Foundation for American Policy, Every 1,000 Ph.D. students blocked in a year from U.S. universities costs an estimated $210 billion in the expected value of patents produced at universities over 10 years and nearly $1 billion in tuition fees. This does not include other economic costs, such as the loss of highly productive scientists and engineers, or the subsequent loss of patents and innovation generated outside universities.

Meanwhile, hundreds of thousands of Chinese students are returning to China to continue their academic careers or employment, either voluntarily or left with no options by PP10043. For Beijing, this may just be a loss of face. It is the U.S. that suffered from a real brain drain - the patents that could have been filed in the U.S. now have appeared in China, owned or to be owned by Chinese companies. From this perspective, PP10043 has hurt the United States badly, while China may have even picked up the bargains with no losses at all.

How did it happen in the first place? Well, those in Washington played up the fear of Chinese students, taking advantage of the collective hatred towards Asian-Americans that has long existed in the American society. What played out are the violent crimes against Asians in all major cities. On the other hand, the Biden administration is doing nothing but meeting the South Korean K-POP group and enjoying their performance at the White House. Keep in mind that no major change would come from a weak and incompetent White House.

To fundamentally address the plight faced by Asian Americans, what needs to be clamped down is not the visas, but the "Sinophobia" derived from Chinese Exclusion Act that has been around for more than 100 years. Ban all proclamations against Chinese and Chinese students, not the entry of them. Back to now, the legal action took by the students against the U.S. government becomes critical, to reverse not only PP10043, but many more to come in the future.

Those concerned about the future of America, shouldn't you support the fight of these students?

Disclaimer: This article is reproduced from other media. The purpose of reprinting is to convey more information. It does not mean that this website agrees with its views and is responsible for its authenticity, and does not bear any legal responsibility. All resources on this site are collected on the Internet. The purpose of sharing is for everyone's learning and reference only. If there is copyright or intellectual property infringement, please leave us a message.
Back to top